The objective of this tool is to analyze the traces captured from a given scope. 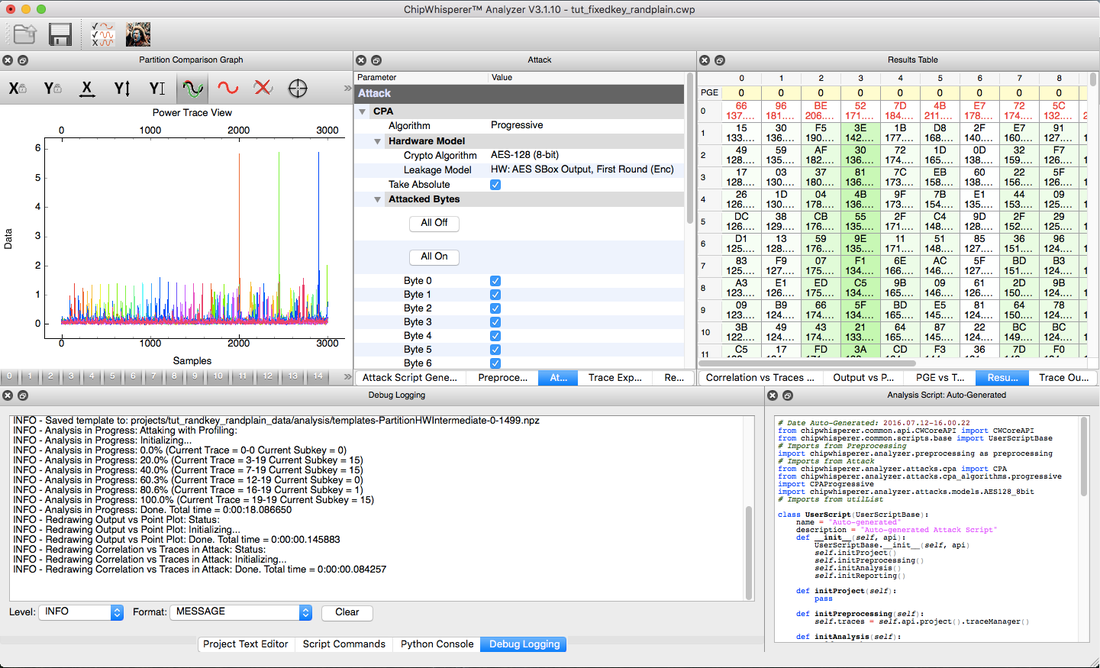 After loading the project, you will need to setup the analysis environment first.

In the analyzer, the settings tabs are used to automatically generate the analysis script (shown in the "Analysis Script" dock). This code can be edited by the user for a more "advanced" usage. It can also be saved and loaded through:

In the "Analysis Script" dock, the constructor of the script object is called automatically every time that a new script is generated. It is done because widgets like the waveform viewer should update the trace output of the preprocessing modules when the user modify its settings. The run() method is executed only when the "Start Analysis" button in the toolbar is pressed. Custom methods can be executed by selecting it in the code and right clicking: a "Run Function" option will show up.

Are filters that modify the traces from a given trace source (that can be another Preprocessing Module or the Trace Manager) and works as a new trace source to the next module in the chain (called trace observer).

Add random noise to the traces. Used for testing, has no use in actual analysis.

Add random jitter. Used for testing, has no use in actual analysis.

Attempts to 'recover' the clock by band-pass filtering, and then uses that to decimate to only points of interest. ****CURRENTLY NOT SUPPORTED****

Decimate (reduce the sample rate) by a fixed factor.

Use cross-correlation to detect shift between a 'reference trace' and every input trace. In practice the other resync methods seem to work better.

Line up traces so peak (either max positive or max negative) within some given range of points all aligns.

For each trace the following must hold or the trace is rejected:

Resync: Resample based on Zero-Crossing

Deal with resampling 'bins' based on zero-crossing detection.

Minimize the 'Sum of Absolute Difference' (SAD), also known as 'Sum of Absolute Error'. Uses a portion of one of the traces as the 'reference'. This reference is then slid over the 'input window' for each trace, and the amount of shift resulting in the minimum SAD criteria is selected as the shift amount for that trace.