There are three versions of the ChipWhisperer Capture Rev2, also called the CWCR2. They are:

Fundamentally all of these units are the same. The self-made PCB may of course have dropped certain features, so some of these sections may not be relevant.

The following figure highlights some of the hardware features of the ChipWhisperer Capture Rev2. Specifics of each area will be discussed in this chapter.

This shows the ChipWhisperer main PCB. Various features are highlighted on this figure.

It may be neccessary to access the ChipWhisperer PCB. This is done by removing the rear panel, and sliding out the bottom panel. Note that friction from the front panel may require the two lower front screws to be slightly loosened.

If it's desired to complete remove the main PCB, the front panel will also need to be removed. This is neccesary to reduce the friction on the main PCB such that it can be slid out of the case.

Access to the main PCB is shown in the following figures: 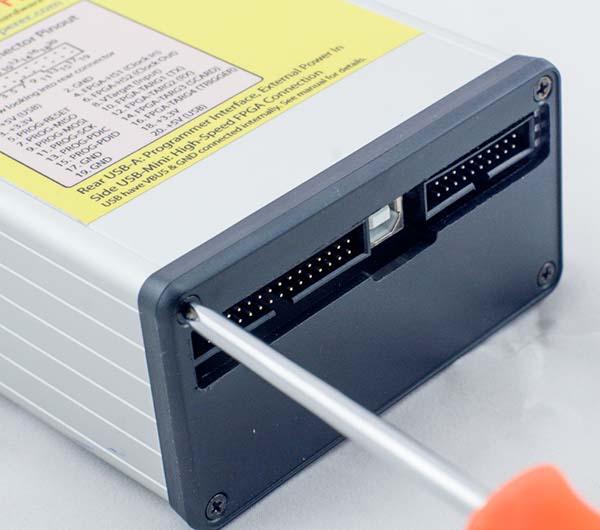 caption Remove the four screws holding on the rear panel. 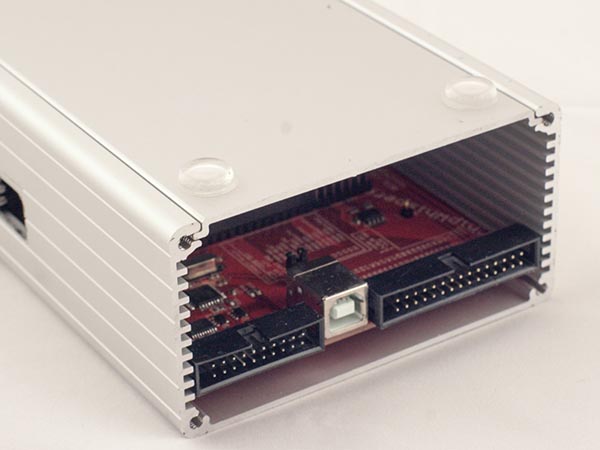 caption It may also be possible to change a jumper setting without removing the bottom panel. If full access is needed, the bottom panel should be removed by sliding out. 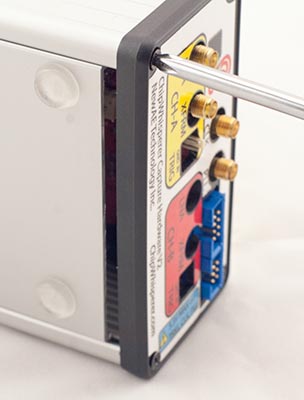 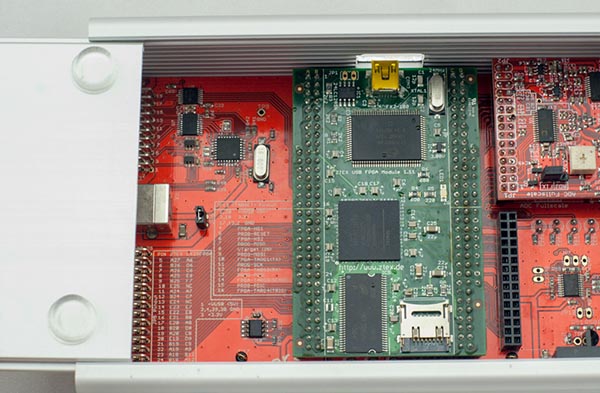 caption The bottom panel can now be fully removed.

The AVRUSB portion mentioned in figcwcr2, which is an AT90USB162 device. This chip is programmed to function as a programmer for the AVR or XMEGA device on the Multi-Target board. In many instances it's desired to reprogram this AVR, for example to use it for communications with a SPI target device.

It should be possible to program the AVR by forcing it to revert to the bootloader, a process described below. If this doesn't work, there is also a manual override available.

Programming the AVR-USB is done via Atmel's FLIP software, available from Atmel's Website. As an alternative you can use the DFUProgrammer software, which is open-source and works on both Windows and Linux.

This programmer will interact with a bootloader that is always resident on the AVR-USB device. Once it becomes active it will require you to install a new driver, since it appears to your computer as a completely different device. Both FLIP and dfuprogrammer come with drivers, so just point your New Device Found wizard to the appropriate location if they aren't automatically picked up. For FLIP it would be something like C:\Program Files (x86)\Atmel\Flip 3.4.5\usb.

The sequence of steps to program a new .hex file into the AVR are as follows:

See the following figure for location of the two jumper pads. You will need to short them with something metallic such as tweezers or a small flat-head screwdriver. In a pinch a coin such as a dime can be used. The required operations are:

This will cause the AVR to jump to the bootloader, and your programming software can be run. 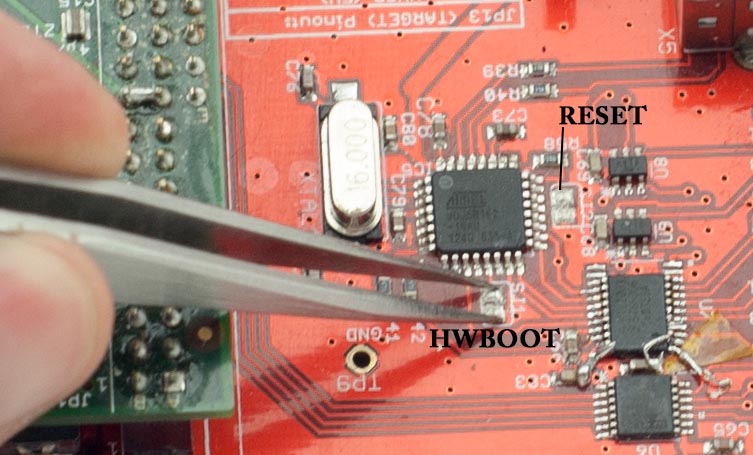 This shows the two jumper pads (SJ1 and SJ2). SJ1 is the HWBOOT feature, and SJ2 is the RESET feature.

Installing Drivers for CaptureRev2 on Windows

Windows should pop up a New Hardware Found dialog, but frequently may not. In which case force the driver to update using the following:

Note as of version 0.07 of the ChipWhisperer release you DO NOT need to install Java. Previous versions required this, so you may see reference to that in videos or other documentation. Be confident you can now avoid installing Java when running ChipWhisperer.

Finally, we can configure the ChipWhisperer-Capture software to communicate with the hadware. To do so you need to configure the FPGA loader program, microcontroller program, and FPGA bitstream.

Note as of version 0.09 of the ChipWhisperer release the tool will automatically download firmware to unprogrammed FPGAs. You do not need to explicitly run this tool before connecting, however it is still useful for debugging or forcing the loading of new firmware. In addition you must have selected the proper scope and ChipWhisperer model for the firmware download to work - this is a change from 0.08 which just blindly presented the menu choice.

You can see a Video of the Installation Process. Note the drivers are now signed, so you will no longer see a warning about unsigned drivers. 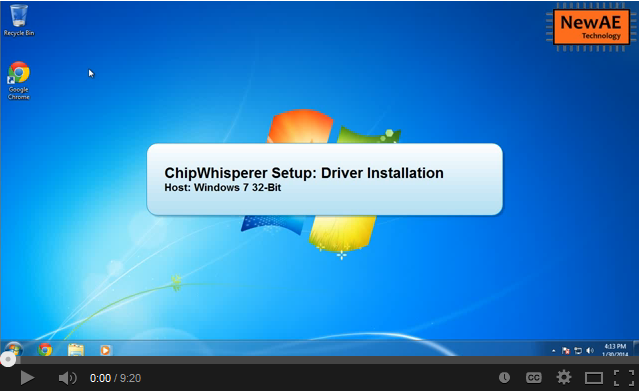 Using the AVR Programmer on Windows

You can see a Video of the Target Build Procedure: 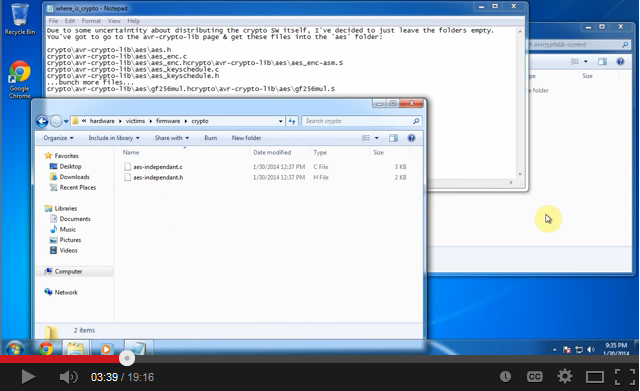 Using the AVR Programmer on Linux

To use the AVR Programmer from Linux, you again need to pass control of the device to a special group. Create a file called /etc/udev/rules.d/99-avrisp.rules . The contents of this file should be:

You'll have to add yourself to the plugdev group if you haven't already:

And reset the udev system:

Finally log out & in again for the group change to take effect.

You can now use the programmer with the 'avrdude' software.

Looking into the male connector on the ChipWhisperer Capture Rev2, the following is the pinout:

The pinout is as follows:

The main ChipWhisperer Capture Rev2 PCB has several jumpers and connectors. This section explains the use of these jumpers. Note you will need to remove the case to access these jumpers.

Communication with the HID USB interface requires a Python package, hidapi. Follow these steps to install:

NOTE: It appears sometimes the resulting hid.pyd file causes a crash on Windows. If this is the case a pre-compiled .pyd file is available for use.

You need to use the ChipWhispererSPI.hex file in the AVR-USB. See the details earlier in this guide for reprogramming instructions.