This page has not yet been updated for the v5 release. Some information may be outdated. 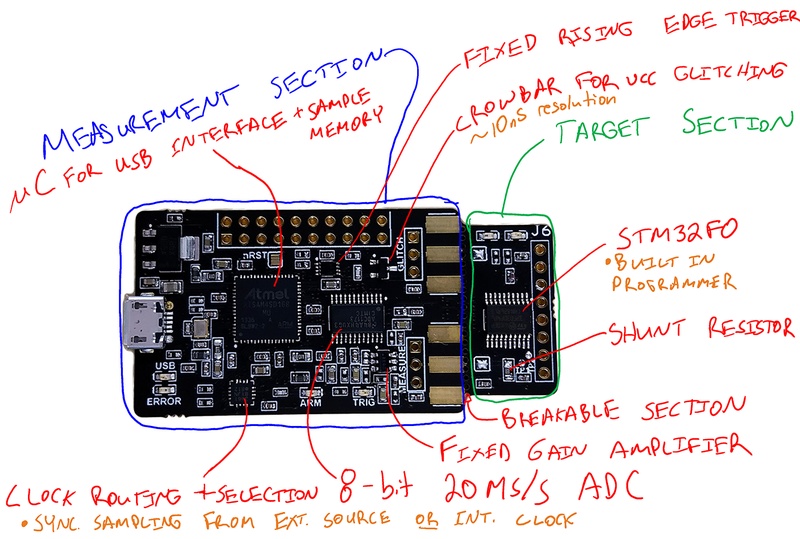 ChipWhisperer-Nano is an ultra low-cost platform for side-channel power analysis & voltage fault injection. It has the following features:

It is primarily designed for power analysis demonstrations and training programs. It is also available as a module without a target for integration onto a target board, as one option for ChipWhisperer-Enabling your development platforms.

Examples of Tutorials you can Run

ChipWhisperer-Nano is a complete tutorial platform. You could run the following tutorials on it for example (using the included target):

If you were to attach an external target, you could also do the following:

Limitations compared to ChipWhisperer-Lite and Pro

The ChipWhisperer-Lite and Pro both use an FPGA for performing all clock routing, in addition to using better ADCs and analog front ends. Fundamentally, the design of the ChipWhisperer-Nano means it has the following major limitations:

Note that despite these limitations, ChipWhisperer-Nano can be used for attacking real devices. You can attack hardware crypto running on a microcontroller, or use power-analysis to recover a bootloader password or key. The fundamental synchronous architecture of the device (which powers all of our capture hardware tools) means it achieves considerably better performance than a regular asynchronous oscilloscope, even when that oscilloscope is running 5-20x faster.

You have two options for connecting to external targets: to either break off the STM32F0 end, or to program it with a loop that keeps all I/O in tristate mode. Either way you will also need to add the following connectors:

If using the tri-state mode, you should ensure the PDIC line is held LOW to avoid accidentally entering bootloader mode on the STM32F0.

There will be some additional noise due to the STM32F0 being on the power line. You can reduce this by opening the solder jumper that links the STM32F0 to the input stage.

Similar to the ChipWhisperer-Lite, you can break off the end section. To do that, you will have to do the following:

To reprogram the CW1101, you simply need to force the ERASE. This is done by shorting the "ERASE" jumper on the bottom side while plugging in the USB. This is easier to do by inserting the micro-USB end into the CW1101, and leaving the full-sized end not plugged into the computer. While shorting the ERASE jumper with tweezers have someone plug in the full-sized USB. The device should re-enumerate as a serial port, and the USB LED will be off or dimly lit.

There exist TWO beta (pre-release) versions floating around. The two versions were released at these events:

These versions have some limitations. First, they have not been well tested and were not built under the normal production processes, so are not guaranteed to be as reliable w.r.t. soldering. Second, they have some specific hardware changes relative to the production units: