This tutorial discusses a specific type of glitch attack. It shows how a simple printing loop can be abused, causing a target to print some otherwise private information. This attack will be used to recover a plaintext without any knowledge of the encryption scheme being used.

This section introduces the attack concept by showing some real world examples of vulnerable firmware. Then, it describes the victim firmware that will be used in this tutorial.

Typically, one of the slowest parts of an embedded system is its communication lines. It's pretty common to see a processor running in the MHz range with a serial connection of 96k baud. To make these two different speeds work together, embedded firmware usually fills up a buffer with data and lets a serial driver print on its own time. This setup means we can expect to see code like

This is a pretty vulnerable piece of C. Imagine that we could sneak into the source code and change it to

C compilers don't care that buffer[] has a limited size - this loop will happily print every byte it comes across, which could include other variables, registers, and even source code. Although we probably don't have a good way of changing the source code on the fly, we do have glitches: a well-timed clock or power glitch could let us skip the i < number_of_bytes_to_print check, which would have the same result.

How could this be applied? Imagine that we have an encrypted firmware image that we're going to transmit to a bootloader. A typical communication process might look like:

We have a pretty straightforward attack for this type of bootloader. During the last step, we'll apply a glitch at precisely the right time, causing the bootloader to print all kinds of things to the serial connection. With some luck, we'll be able to find the decrypted plaintext somewhere in this memory dump.

For this tutorial, a very simple bootloader using the SimpleSerial protocol has been set up. The source for this bootloader can be found in chipwhisperer/hardware/victims/firmware/bootloader-glitch. The following commands are used:

The bootloader uses triple-ROT-13 encryption to encrypt/decrypt the messages. To help you send messages to the target, the script private/encrypt.py prints the SimpleSerial command for a given fixed string. For example, the ciphertext for the string Don't forget to buy milk! is

This folder also contains a Makefile to create a hex file for use with the ChipWhisperer hardware. The build process is the same as the previous tutorials: run make from the command line and make sure that everything built properly. If all goes well, the Makefile should print something like

Since we have access to the source code, let's take our time and understand how our attack is going to work before we dive in.

Inside bootloader.c, there are two buffers that are used to store most of the important data. The source code shows:

This tells us that there will be two arrays stored somewhere in the target's memory. The AVR-GCC compiler doesn't usually try too hard to move these around, so we can expect to find them back-to-back in memory; that is, if we can read past the end of the ASCII buffer, we'll probably find the data buffer.

Next, the code used to print a response to the serial port is

This looks very similar to the example code given in the previous section, so it should be vulnerable to a glitching attack. The goal is to cause the loop to continue past its regular limit: data_buffer[0] is the same as ascii_buffer[80], so a successful glitch should dump the data buffer for us.

As a final step, let's check the assembly code to see exactly what we're trying to glitch through. In the same folder as the hex file you built, open the *.lss file that corresponds to your target (for example, bootloader-CWLITEARM.lss). This is called a listing file, and it contains a bunch of debug and assembly information. Most importantly, it will allow us to easily match the source code to what's in our hex file. Search the file for something close to the vulnerable loop, such as state == RESPOND.

After searching the file, you should see something like this:

This is our printing loop in assembly. It has the following steps in it:

There's one quirk to notice in this code. In the C source, the for loop checks whether i < ascii_idx. However, in the assembly code, the check is effectively whether i == ascii_idx! This is even easier to glitch - as long as we can break past the brne instruction once, we'll get to the data buffer.

After searching the file, you should find:This is our printing "loop", but as we can see, it's not really a loop at all! As it turns out, the compiler has unrolled our loop, which typically speeds up execution at the expense of code size. It will be very difficult to prevent this with such a small loop, so instead we'll increase the loop size by adding some extra newlines at the end of the message:If you want to use the script at the bottom, you should add the 5 newlines above, but other values will work fine with different glitch parameters. Recompile and take another look at the listing file. You should see that our printing loop is actually a loop now:We can break this assembly down into the following steps (starting with address 0x8000268):

There's one quirk to notice in this code. In the C source, the for loop checks whether i < ascii_idx. However, in the assembly code, the check is effectively whether i == ascii_idx! This is even easier to glitch - as long as we can break past the brne instruction once, we'll get to the data buffer.

To speed up the tutorial, the script in #Appendix: Setup Script will open the ChipWhisperer Capture software and fill in all of the appropriate settings. Copy this code into a Python script and run it. Then, open the serial terminal and connect to the target, using the ASCII with Hex display mode. If everything is set up correctly, the Capture 1 button should cause the text r0 to appear in the terminal. This is the bootloader's response to a block of ciphertext.

Once this is set up, connect the glitch module's output to the target's clock. Do this by changing the Target HS IO-Out to Glitch Module. Try to Capture 1 again and watch the serial terminal. If you're lucky, a large amount of text will appear in this window:

In the middle of this output, the plaintext is clearly visible! The data buffer has successfully been printed to the serial port, allowing us to see the decrypted text with no knowledge of the algorithm.

If you can't get this to work, remember that glitching is a very sensitive operation - one glitch timing will probably not work for every board on every day. Try using the glitch explorer to attack different Glitch Widths, Glitch Offsets, and Ext Trigger Offsets. The built-in Glitch Explorer will be very useful here - take a read through Tutorial A2 Introduction to Glitch Attacks (including Glitch Explorer) if you need a refresher.

If you added the same number of newlines as shown (5), you should be able to run the script at the end of this page from inside ChipWhisperer. Then, open the serial terminal and connect to the target, using the ASCII with Hex display mode. If everything is set up correctly, the Capture 1 button should cause the text r0 to appear in the terminal. This is the bootloader's response to a block of ciphertext.

Once this is set up, connect the glitch module's output to the target's clock. Do this by changing the Target HS IO-Out to Glitch Module. Try to Capture 1 again and watch the serial terminal. If you're lucky, a very large amount of text will appear in this window: 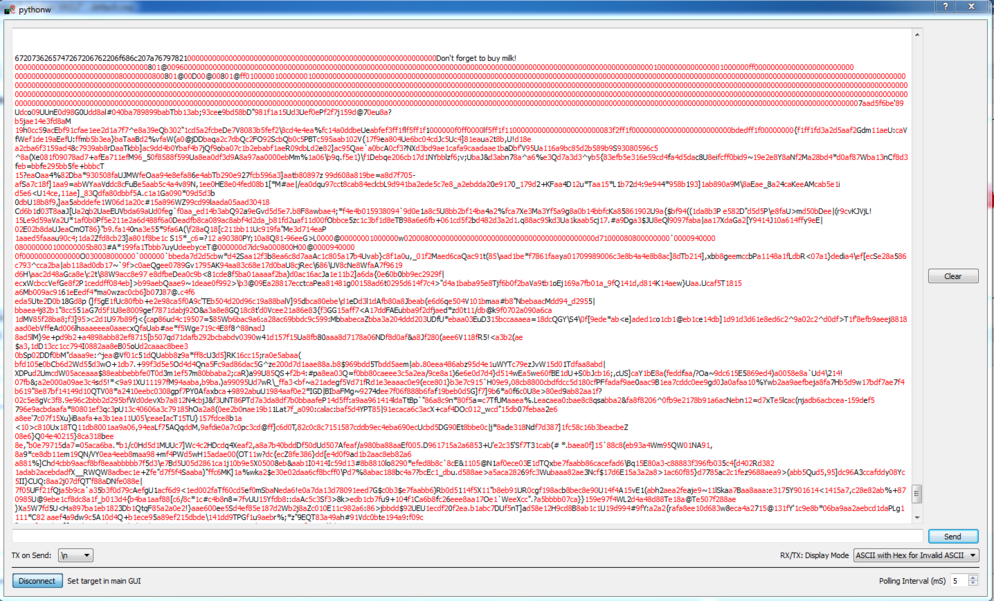 Near the beginning of this output, the plaintext is clearly visible! The data buffer has successfully been printed to the serial port, allowing us to see the decrypted text with no knowledge of the algorithm.

This might take a few attempts. If the target stops responding, you'll need to reset it manually. You may also want to setup a module to iterate over some glitch parameters (ext_offset should be the most important one) like in Tutorial A2 Introduction to Glitch Attacks (including Glitch Explorer).

There's a lot more that can be done with this type of attack...

You may have been surprised to see that the assembly code uses a brne instruction to check if the loop is finished - after all, we used a less-than comparison in our C source code! Try changing this line to use a more prohibitive loop. Here's how you might do this:

The reason why the original assembly code used the brne instruction is because GCC is an optimizing compiler. The compiler doesn't directly translate the C source code into assembly instructions. Instead, it tries to determine if any of the code can be modified to make it faster or more compact. For instance, consider the loop

If you take a careful look at this code, you'll notice that the following loop will produce the same output:

However, this second loop is smaller (less code) and faster (no conditional jumps). This is the kind of optimization a compiler can make.

There are several ways we can stop the compiler from making some of these assumptions. One of these methods uses volatile variables, which look like

A volatile variable is one that could change at any time. There could be many reasons why the value might change on us:

In any case, the volatile keyword tells the compiler to make no guarantees about this variable.

Try changing the bootloader's source code to use a volatile variable inside the loop. What happens to the disassembly? Is the loop body longer? Connect to the target board and capture a power trace. Does it look different? You'll have to find a new Ext Trigger Offset for the glitch module. Can you still perform the attack? Is it feasible to use this fix to avoid glitching attacks?

The following script is used to set up the ChipWhisperer-Lite with all of the necessary settings: